Physical devices connected with web applications made everything easy to be managed. Screen size, availability, usage etc… is what pushing everyone to manage their devices through their desktops/laptops! On the other hand such advantages poses a threat if these web applications contains security issues!

Firefox OS (project name: Boot to Gecko, also known as B2G) is an open-source operating system – made for smartphones, tablet computers and smart TVs – designed by Mozilla and external contributors, based on the rendering engine of their Firefox web browser and the Linux kernel.

Firefox OS is designed to provide a complete, community-based alternative operating system, for running web applications directly or those installed from an application marketplace. The applications use open standards and approaches such as JavaScript and HTML5, a robust privilege model, open web APIs that can communicate directly with hardware, e.g. cellphone hardware. As such, it competes with commercially developed operating systems such as Apple’s iOS, Google’s Android, Microsoft’s Windows Phone, BlackBerry’s BlackBerry 10 and Jolla’s Sailfish OS.

.
About Firefox Find My Device Service

Find My Device (aka “Where’s My Fox”) is a Firefox OS Service which is used to provide a means for users to locate, track and purge devices remotely.

Example Use Cases, MVP User Stories
1) Albert can’t remember the location of his phone. Going to a nearby computer, he logs into WheresMyFox and requests the phone to report it’s location. The phone reports that it is nearby, so Albert requests the device to ring. Albert quickly finds that his phone is in his coat pocket.

2) Bea discovers that her phone is missing. Using a friends phone, she logs into WheresMyFox and requests the phone to report it’s location. She discovers that the phone is currently headed down Broadway, and realizes she has left it in the cab. Realizing that she may never see her phone again, she requests the phone to remotely wipe itself, before calling the cab agency to see if she can recover her device.

And here’s our story…

Firefox Find My Device service is not protected against clickjacking vulnerability neither with the typical “X-Frame-Options” nor with the JS frame busting technique that means a malicious attacker capable of iframing the whole service and tricking the end-users to perform unwanted actions!

[*] Rolling around the bug:

So what we’re doing here?

Studied the web application more, tested it against other issues (XSS, CSRF, Open Redirections, etc..) but it seems pretty solid! hmmm I took a deep breath, drink some power stuff and suddenly came up with a nasty idea!

What about exploiting the usability?

Modern Web Applications are usually designed to satisfy the user’s sake of USABILITY so to be straightforward, “Find My Device” service is redirecting you automatically to the device id page but in one condition (if you’re already logged in from a browser that was used before to access the service “a trusted browser”) that little notice brought the whole scenario back to life, By calling an internal url eg. “https://find.firefox.com/” thanks to the usability thing we’re redirected to our treasure “https://find.firefox.com/8fcXXXXc40de04b3803945XXXXXXXXXX” and we’re good to go! 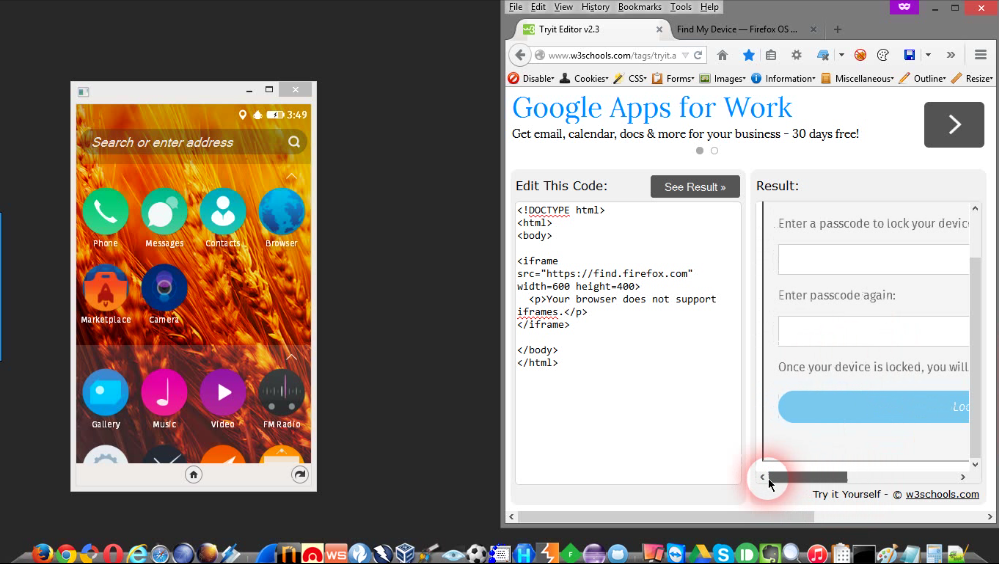 What attackers can do using such vulnerability?:
1- Erase the victim’s device data with just only 3 clicks by the victim himself if he tricked with “click here to win a 50 BTC for Example”
2- Lock The victim device or change his lock code if it is the first time to be set “4 clicks”
3- Makes the Device ringing “2 clicks”

More Details About clickjacking:
Because of no frame busting techniques or X-Frame-Options header, the whole website is vulnerable to Clickjacking attacks which could lead to a full account takeover considering such scenario:
1. Attacker will iframe any sensitive the website page and adjust the iframe size and add a “divs” as a layers on the unwanted-to-show parts of the original web page to fool and trick the user.
2. User get tricked by the crafted page and followed the attacker’s instruction to do a specific clicks to the iframed page
3. Unwanted actions happened in the logged in user’s session in result to the attack’s clicks.

Mitigation:
1- Add an X-Frame-Options HTTP Header and set it’s value to “Deny” or “Sameorigin” as you can see it suitable to mitigate such attacks
2- Use iframe busting techmiques in JS code like this:

Mozilla fixed the issue by implementing the X-Frame-Options header with a value of “DENY” which means even the same domain can’t iframe itself, Good job!

References and other URLs:

Thanks for reading, Till the next adventure!

Hey!
Building a website? Or already built a one? Think twice before going public and let us protect your business!

Next article
Facebook movies recommendation vulnerability - A bug capable of erasing all your important notifications!
Translate this blog
Scroll Up